RETURN TO THE LIGHT

After thirty years in the darkness BFG will be returning to the live stage at Berlins ‘Slaughter House;

BFG last performed in Berlin when the  wall that divided  East from  West was still   very much in exsitance, however  BFG will once  again be performing in Berlin,  appearing at the ‘Slaughter House’  on 14th October 2016 with fellow British band ‘The Snake Corps’.

Following a  chance email from Berlin ‘dark wave’ promotor Jurgen Jackob a series of events began to unfold  that has resulted in BFG reforming and performing their first concert in nearly thirty years and the first time that the album BLUE will be performed live. 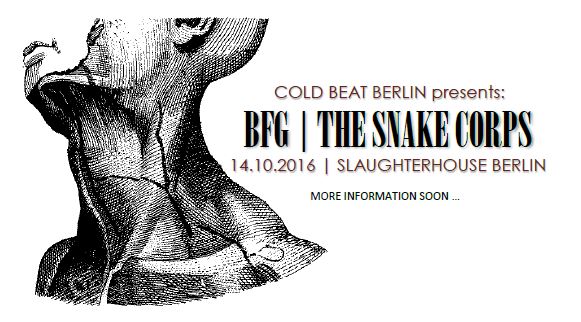 The original members of BFG who performed on BLUE with be joined by guitarist Zero, and the self styled ‘immovables’ bassist Andy Wright (ex Factory Records Red Turns To) guitarist Elliot Wheeler (Danse Socierty) and Danny Cunningham (Section 19)